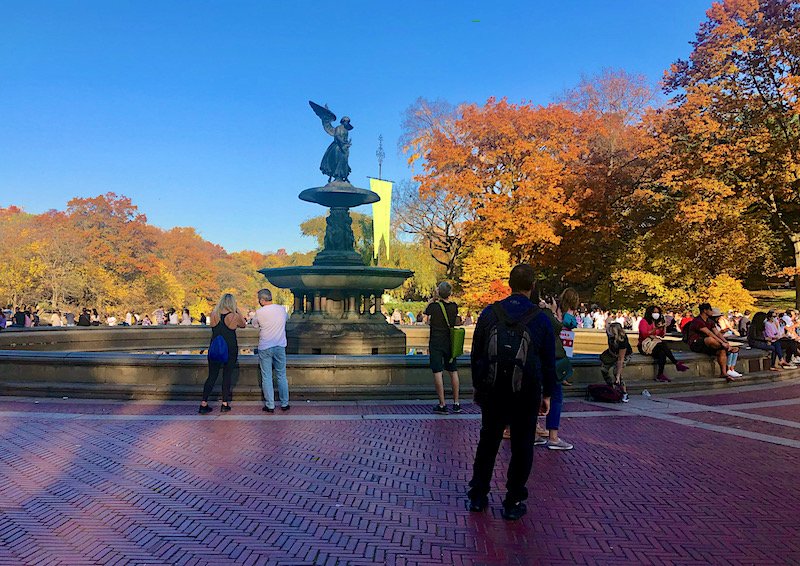 Bethesda Terrace and Fountain is beautiful at any time of year.

Located at the 72nd Street Cross Drive and considered the heart of Central Park, Bethesda Terrace and Fountain is stunning during all four seasons and at any time of day, be it daybreak or twilight. Constructed mostly from sandstone, the wide open space consists of an upper and lower terrace connected to two large staircases leading to the Arcade, which has the only ceiling in the world showcasing Minton tiles.

At its center, Bethesda Fountain measures 26 feet high and 96 feet wide. It is one of the city’s largest fountains, and a desirable spot to meet friends, take a date, walk your dog, or find some alone time.

“Angel of the Waters”

Bethesda Fountain is the main feature on the lower section of Bethesda Terrace. The elegant sculpture, designed by Emma Stebbins in 1868 and later unveiled in 1873, is the grand focal point. The eight-foot bronze angel statue, also known as Angel of the Waters, sits atop the fountain with four cherubs at the base signifying Temperance, Purity, Health, and Peace. This quintessential monument is recognized as one of the most beautiful and frequented fountains in the world. 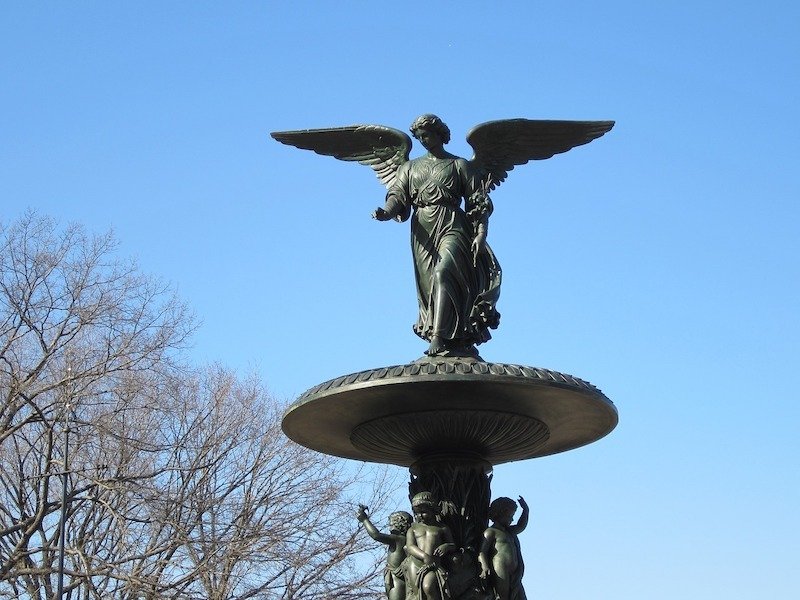 History of Bethesda Terrace and Fountain

The terrace was one of the earliest structures built in the park, beginning in 1859 and completing in 1863. It sits at the end of the leafy promenade known as “The Mall” (my personal favorite area of the park) and lords over the Lake and Loeb Boathouse.

In the 1960s, the terrace was the site of an outdoor café. It later turned into a hangout for the Hair generation before its downturn, sadly becoming a haven for drug addicts and dealers. At that time, the gorgeous landmark was even referred to as “Freak Fountain.” Falling into disarray by the late ’70s, Bethesda Fountain was dry for years. The Central Park Conservancy returned the monument to its grandeur during the original park restoration campaign from 1980-81. The conservancy refurbished the terrace the following season. 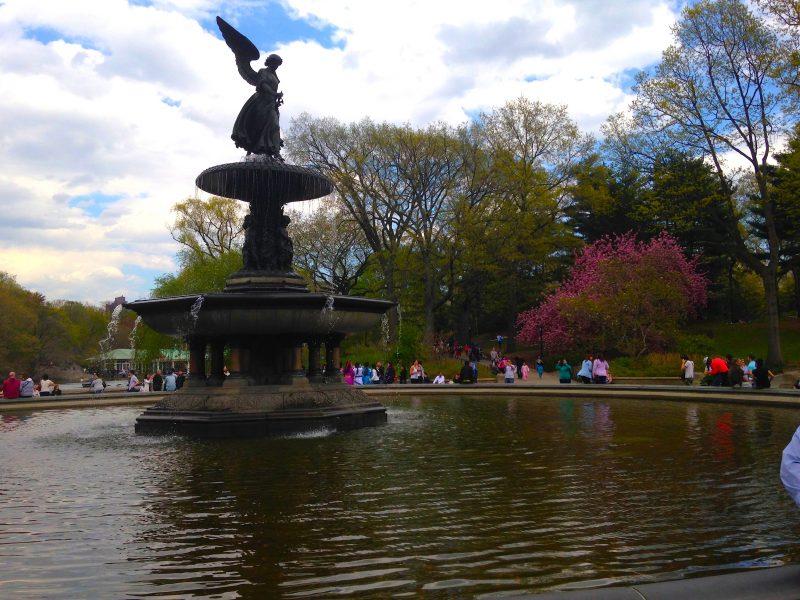 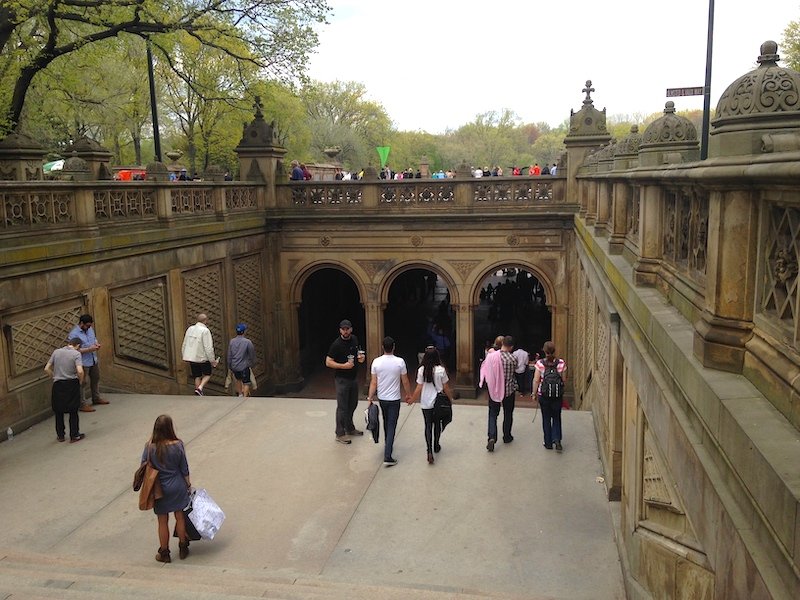 Bethesda Terrace and Fountain on the Silver Screen

The sight is one of the most iconic in all of New York City, and undoubtedly one of the most picturesque on film. Whether you’ve seen it in person or not, you probably recognize the famous fountain and terrace from both film and television.

Featured in such TV shows as Gossip Girl, Lipstick Jungle, Law & Order, Sex and the City and The Amazing Race, the classic locale is often a first choice when TV and movies showcase Central Park and its attractions. Films staged at the Manhattan landmark include Godspell, Home Alone 2, Elf, Disney’s Enchanted, Stayin’ Alive, When Harry Met Sally, Maid of Honor and Friends with Benefits, to name a few. The statue played an essential role in both the play and movie, Angels in America by Tony Kushner. 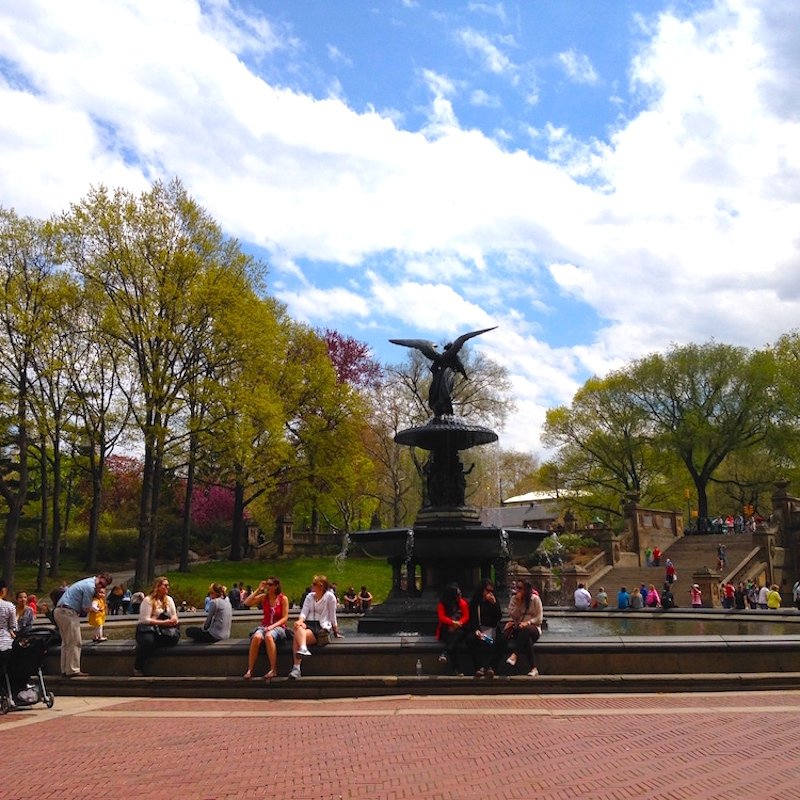 To get there, enter Central Park at 72nd Street (from either Central Park West or Fifth Avenue), and proceed toward the center of the park. Since it’s close to the Mall and Literary Walk, you can explore those Central Park attractions on your visit.

Also, a pretty Upper West Side garden you might not know about. And everyone should see Madison Square Park.

Plus a gorgeous garden in Gatineau, Quebec.