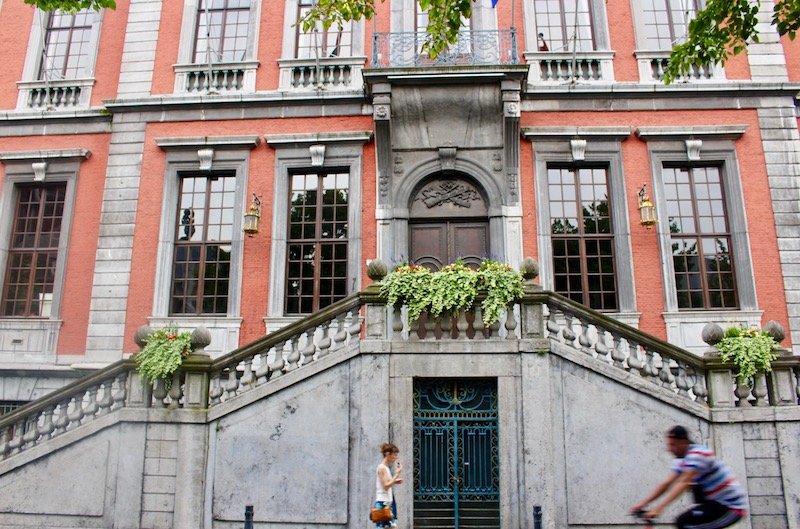 Things to Do in Liège, Belgium

Liège. This alluring Belgian city, also the birthplace of Charlemagne, sits on the Meuse River and is about an hour from Brussels by train. Liège is ideal for a day trip, weekend getaway, or part of a more in-depth Wallonia itinerary. While the city doesn’t attract as much attention as some other parts of Belgium, Liège is well worth the trip. Here’s a sampling of things to do in Liège, Belgium.

Explore the architecture with a camera in hand.

The architecture in Old Town Liège is breathtakingly beautiful. The center of town takes on a modern vibe in many ways, but you could close your eyes and imagine that you’ve stepped back into medieval times, or at least the 17th or 18th century. Wander around with your camera ready to shoot, because you won’t be able to stop oohing and aahing and taking photos of the majestic buildings and cobblestone alleys. I certainly couldn’t. Make it a point to see the historic Prince-Bishops’ Palace – the dominant building on bustling Place St. Lambert, which houses the provincial government and law courts. 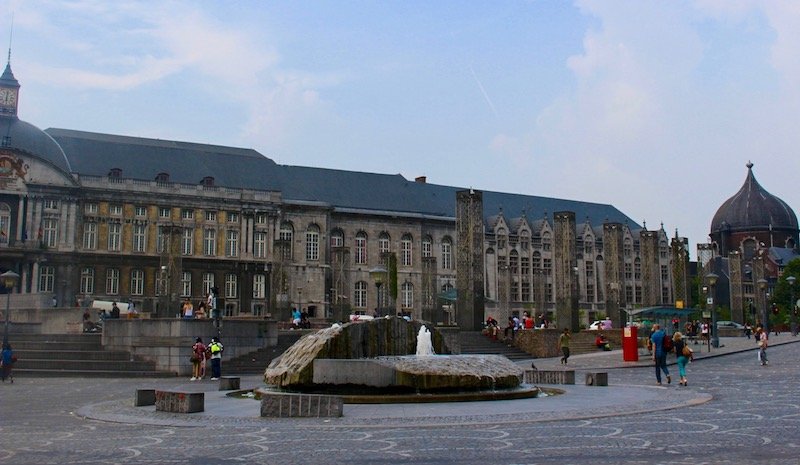 City Hall is another stunning building in Liège. While this quintessential Belgian structure isn’t as old as some others in the city––it dates to the early 1700s––it’s worth adding it to the itinerary. Liège town hall is near some of the other attractions, such as  Montagne de Bueren, so you’d likely stroll past it and not realize what you’ve missed. (Hopefully, now you wont!) Also called “La Violette,” the town hall alternates brick and limestone and is a gorgeous representation of Baroque architecture. City Hall is on Place du Marche (more on this later) and across from Le Perron, a monument representing Liège’s freedom.

The Liège-Guillemins train station is at the opposite end of Liège’s architecture spectrum. Designed by famed Spanish architect and engineer Santiago Calatrava––also responsible for the World Trade Center Transportation Hub in New York City and countless other iconic structures around the globe––this modern station is made of concrete, glass, and steel. The Liège-Guillemins station provides easy access to and from Brussels, France, Germany, the Netherlands, and Luxembourg, so if you’re traveling around Europe, there’s a pretty good chance you’ll use this station. Don’t ignore the view from the station, either. 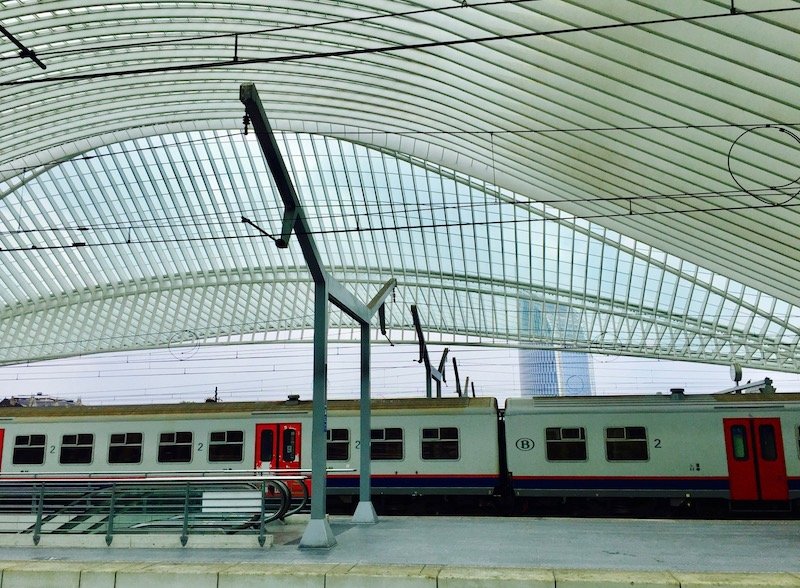 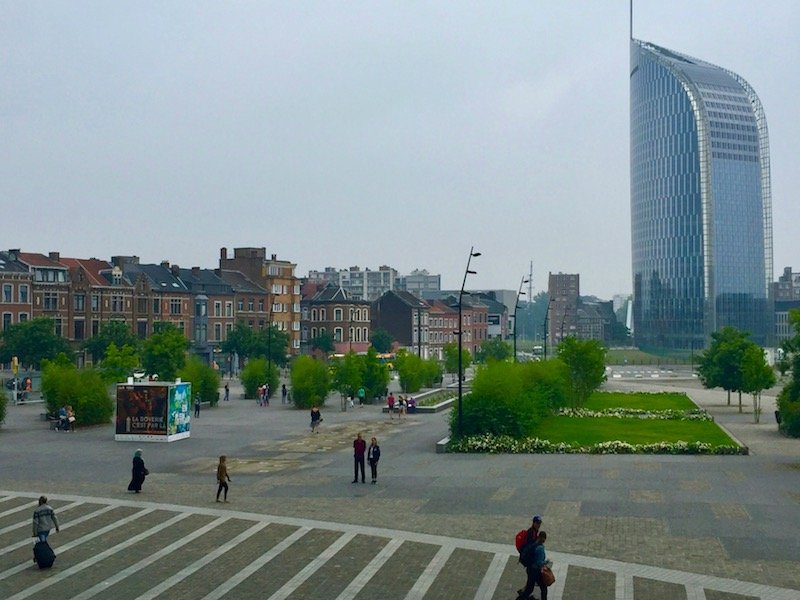 Meatballs in rabbit sauce (no rabbit involved) might not be food that strikes a chord when you think of dining in Belgium, but at Amon Nanesse – La Maison du Peket, this is the dish to eat. I traveled with my friend Danielle, the creator of the Style and Beauty Doctor, and since we had heard so much about the Le Boulet, she had to have them, and I had a taste. Oh my––these meatballs are so different from any I’d ever tasted, yet so delectable. I’m accustomed to Italian meatballs, but these had a sweet, flavorful sauce that set them apart from the Swedish meatballs we had eaten in Stockholm just days earlier. Basically, I’m saying, if you go to Liège, go to Amon Nanesse and order the meatballs. And did I mention the accompanying frites? Yum. You’ll thank me later.

And while you’re at La Maison du Peket….Peket is the local alcoholic beverage to try while you’re staying in Liège, and the House of Peket is the place to do it. Made with juniper berries, the eau de vie or the region’s version of gin is often enjoyed on the rocks, sometimes flavored with fruit, or mixed with Coca-Cola. 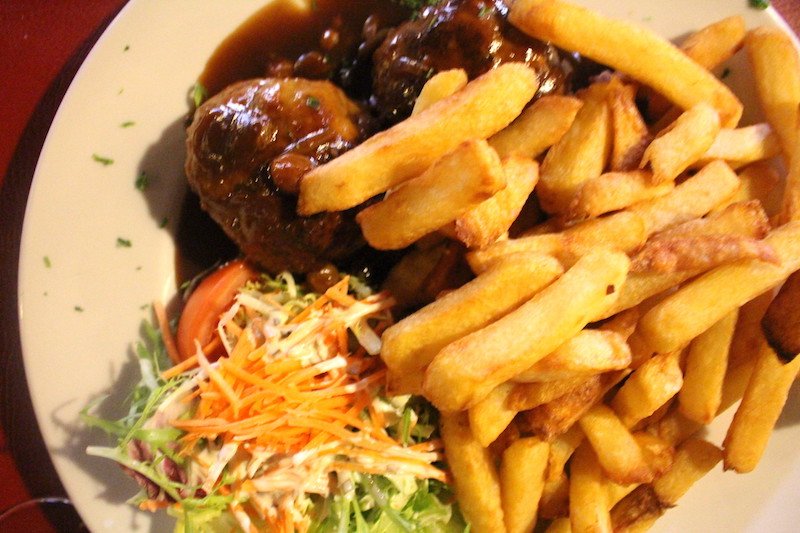 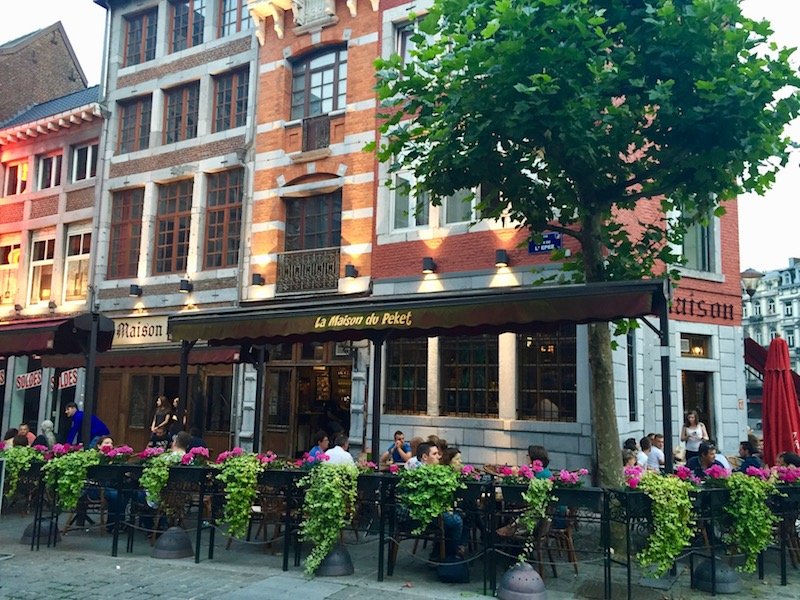 Place du Marche is at the heart of Liège and is the place you’ll probably find yourself in the evenings.

Meander through this lively town center where you’ll stumble upon a bevy of bars, restaurants, and taverns. In summer, locals sit outside with their food and drink, conversing and people-watching. The area bustles all day long, but can be especially buzzy late at night, as gay bars, nightclubs, and cabarets come to life. Liège is not a sleepy town! 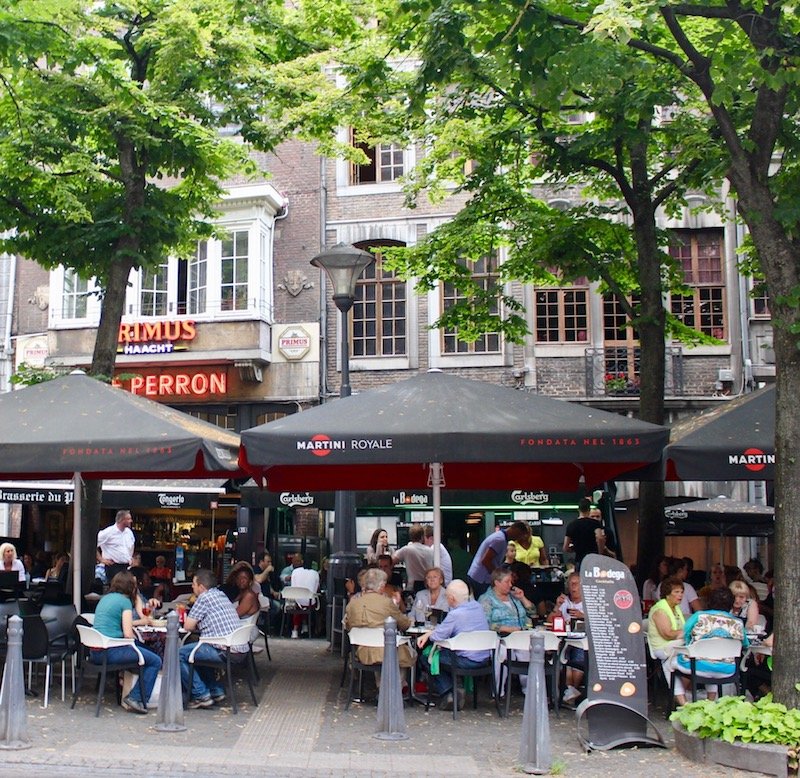 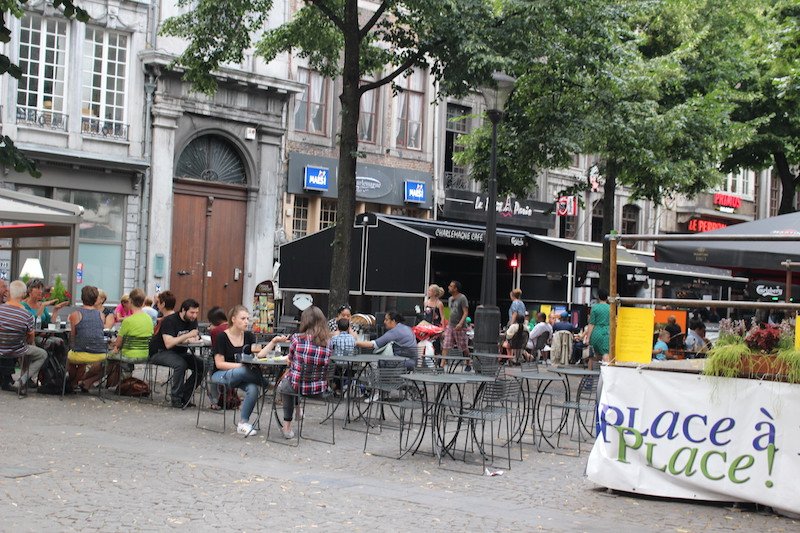 Liège waffles are more dessert-like than Brussels waffles, so these doughy pastries will surely satisfy. In fact, if the caramelized sugar and hint of vanilla don’t hit the spot, tell me why!

I tasted a delectable Liège waffle at the city’s outdoor market (up next). It was doughy, sugary, and downright delicious. 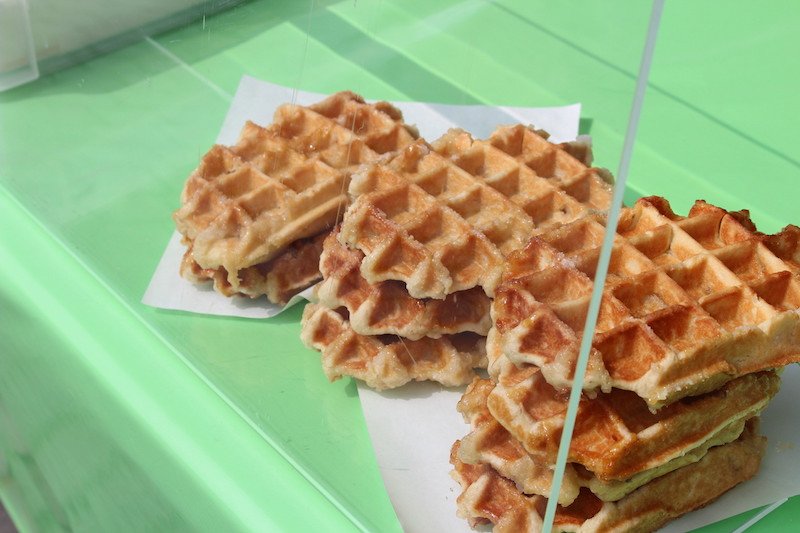 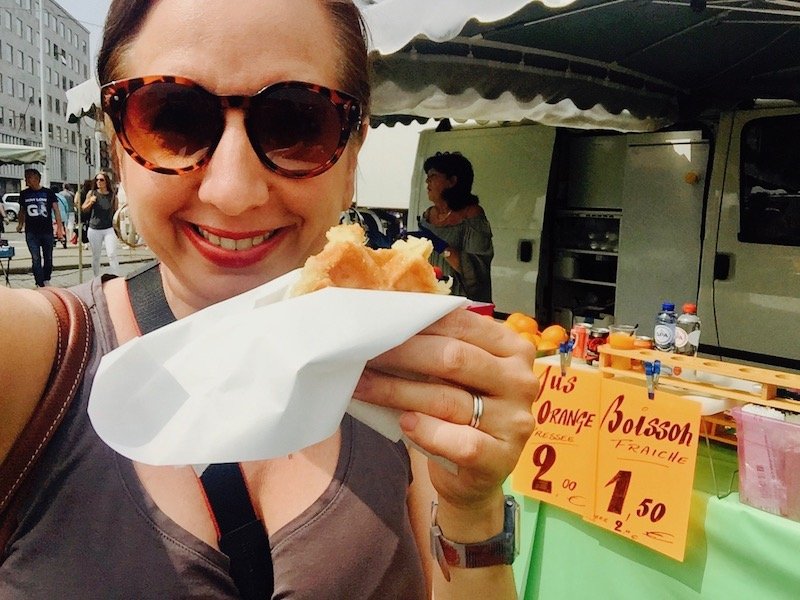 Marché de la Batte is said to be the largest outdoor market in Europe. Staged along the Meuse from 8 a.m. until 2:30 p.m. every Sunday, la Batte draws thousands of visitors. Browse the stalls and stands and observe Walloons selling their wares, taking in the local culture at the same time. Marché de la Batte is a must during the warm weather months. 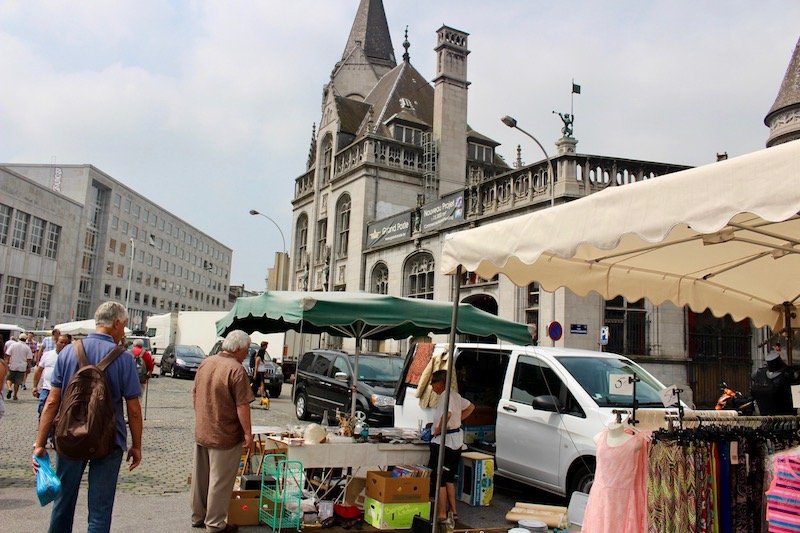 Montagne de Bueren is a 374-step stairway, and I’d be lying if I said that I climbed all the way to the top. Rather than putting my legs to work on those stairs, I meandered and caught some beautiful pictures of the area, then opted for a fun photo session near the base. I might have missed out, though, because the view of the city from the top is supposedly spectacular. But in all honestly, in the 30 minutes or so that I spent at the bottom, I didn’t see many others attempting the climb either. It’s no coincidence that The Huffington Post awarded Montagne de Bueren the number one spot for extreme staircases. Maybe I’ll have the energy on my next trip to Liège. 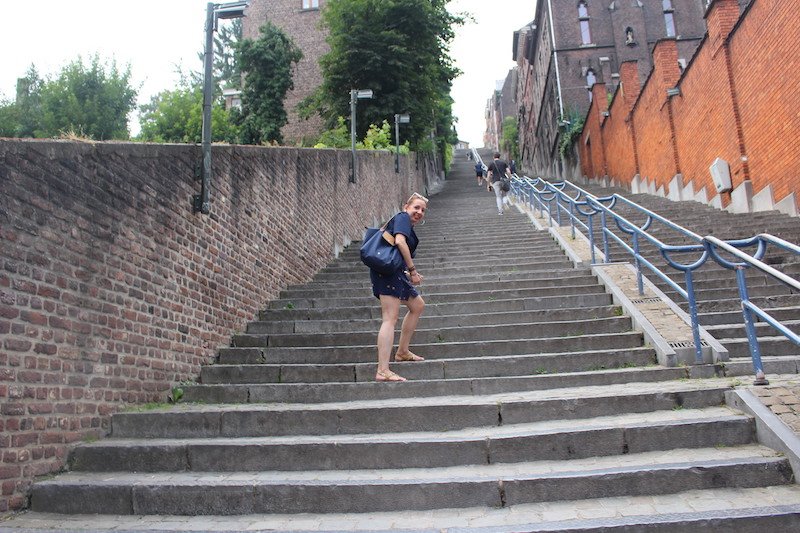 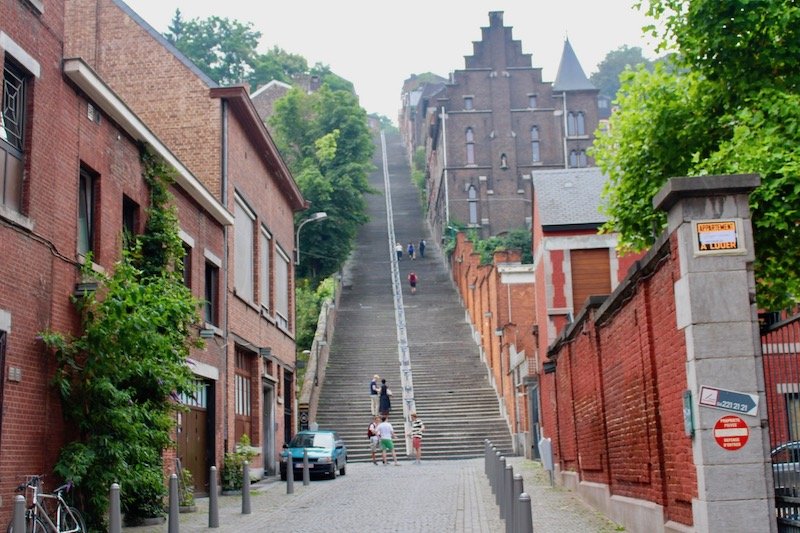 This list skims the surface as there’s so much to do in this underrated Belgian city.

Have you visited Liège? What did you do on your trip?

Many thanks to Wallonia Tourism for sponsoring a portion of my trip to Liège.

Also, while you’re in Europe, make it a point to see Milan, Italy’s fashion capital. Plus photos to inspire your next trip.

« Puerto Vallarta Is for Foodies
How to Spend Two Days in Milan, Italy »