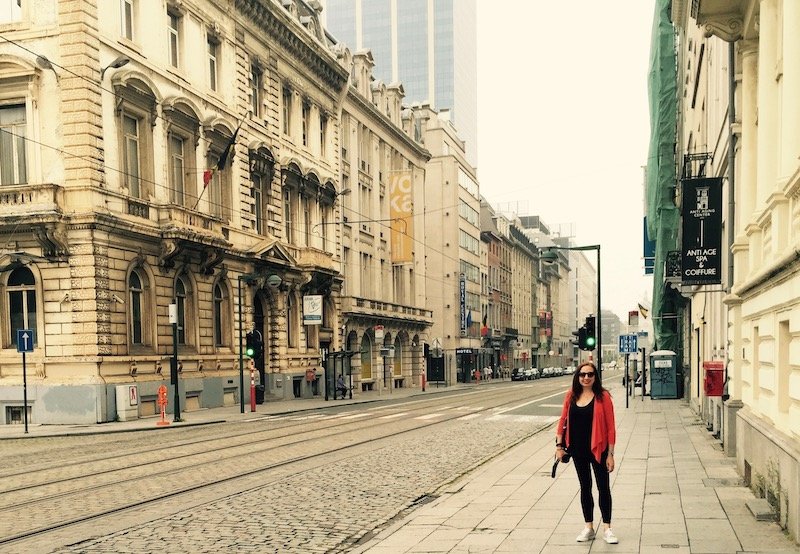 Loving my time in Brussels.

Other European cities garner tons of attention, but Brussels seems to linger in the background. After I spent a few days in this beautiful city, I can honestly say that Belgium’s capital deserves some time in the spotlight. Why? I was bowled over by the architecture, culinary scene, and friendliness of the people. Here’s an overview of what to do if you have two days in Brussels.

Admire the amazing architecture and gardens when in Brussels.

Regarding architecture, Brussels is known for La Grand Place or its central square, which is probably the most visited landmark in the city. LA Grand Place is truly spectacular and worth a visit, but the downtown cityscape is phenomenal no matter where you turn.

Unexpectedly, I stumbled upon the Royal Palace and Brussels Park while I was wandering near my hotel, and while taking a city tour, I strolled through Petit Sablon Square, a lovely city square marked by trees, flowers, fountains, and 48 columns, each crowned with a statue representing one of the guilds of the 16th century.

The city promises an extensive collection of Art Nouveau-style buildings too, so combined with the Gothic and Neo-Classic, Brussels is a treasure trove of significant architecture. And the best part? You can cover a lot of this town in a day by either walking or hopping the tram. 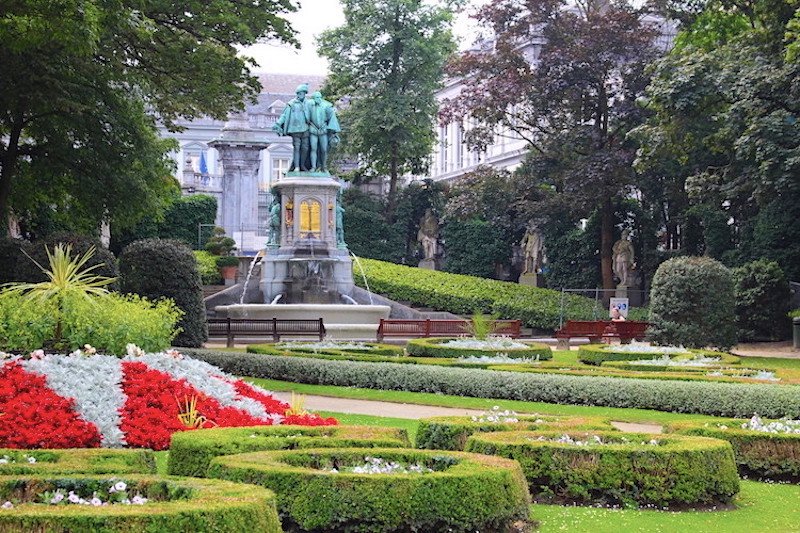 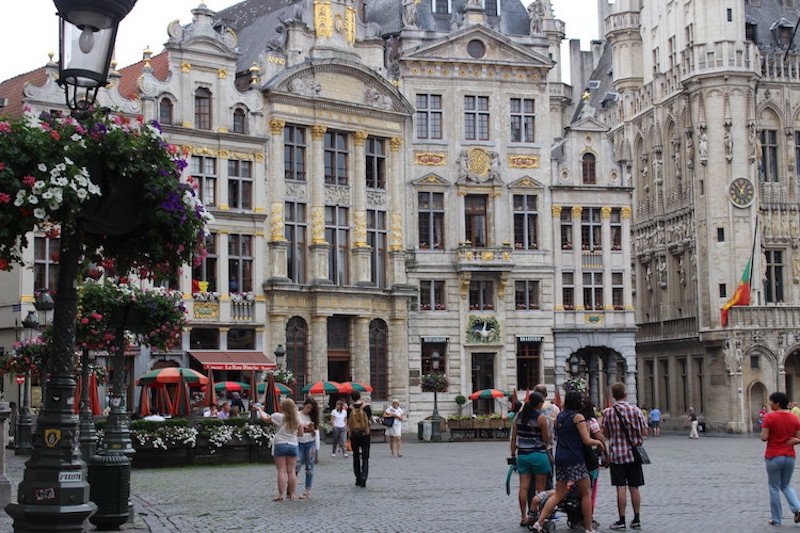 Mingle with the people in Brussels.

I think Belgians were the warmest of all the people I met during my travels in Europe. While Brussels is both French-speaking and Flemish-speaking, many locals speak some English too. Regardless of any language barrier, I found Brussels and Belgium as a whole to be welcoming.

Case in point:  I got a little confused on my way to the MIMA (up next on this list), and stopped a family on the street to ask if I was headed in the right direction. As I paused on a busy corner with an open map in hand, another gentleman came over to help moments later. He assured me that I was a short walk to my destination, and he was correct.

People in Brussels were so friendly, in fact, that they happily posed for a random camera-happy New Yorker. 🙂 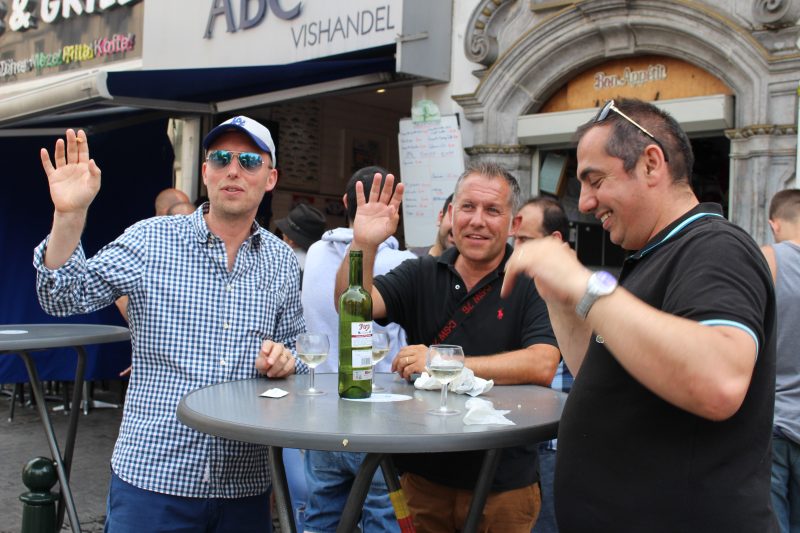 Aiming to bring people together through modern art, the MIMA (Millennium Iconoclast Museum of Art) was founded in April 2016. Located in the old Belle-Vue Brewery adjacent to the Brussels-Charleroi Canal, this unique four-level museum focuses on street art and offers stunning views of the canal and the city, not to mention a casual restaurant on the ground floor.

Visiting the canal to take photos is a must, but while you’re there, be sure to take some time to walk through the MIMA, particularly if you’re a fan of modern art. 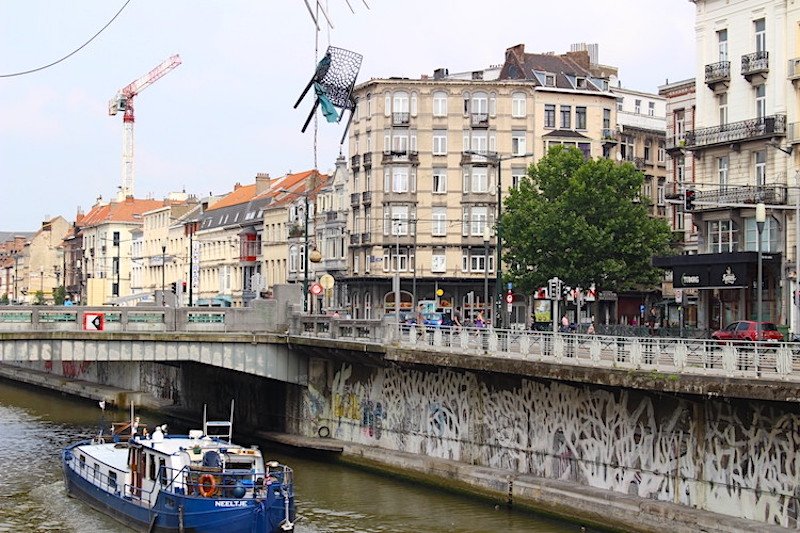 The view from the MIMA

Shop at the fashionable stories in Brussels.

Just like I had no idea that I’d be overwhelmed by the beauty of Brussels, I had no idea that the city is so cosmopolitan, either. From high fashion boutiques to Avec Plaizier (a charming shop filled with postcards and posters) Kroonen & Brown (a lovely cosmetics and fragrance shop), not to mention the patisseries and specialty food shops (more below), exploring the city’s many boutiques is another reason to return. I wish I would’ve had an extra day or two to shop, or at the very least, browse. 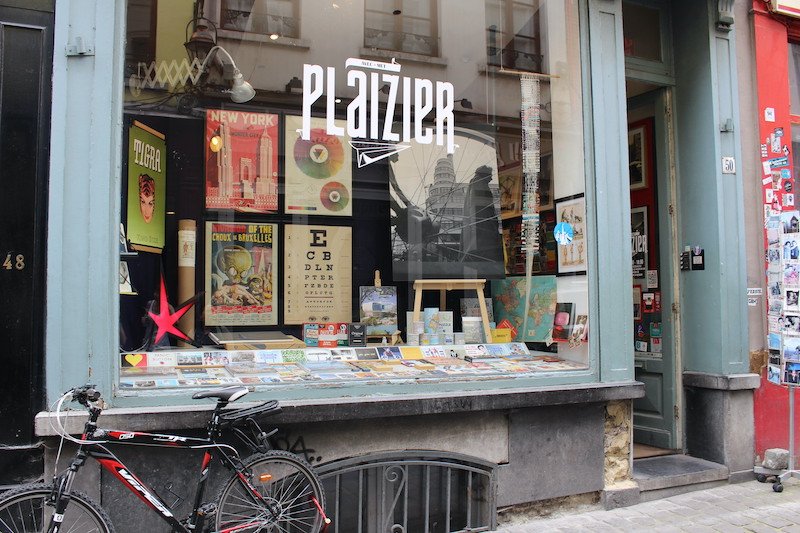 Now let’s move on to the really good stuff… the food and drink in Brussels.

You haven’t eaten mussels and fries until you’ve had them in Belgium. Succulent and perfectly cooked shellfish paired with piping hot frites is an absolute must when you’re in Brussels.

I ate a local restaurant called Le Chou de Bruxelles, located in the Ixelles neighborhood. I have only one regret: not being able to eat every last bite of my moules-frites. The portion was huge, so ideal to share. 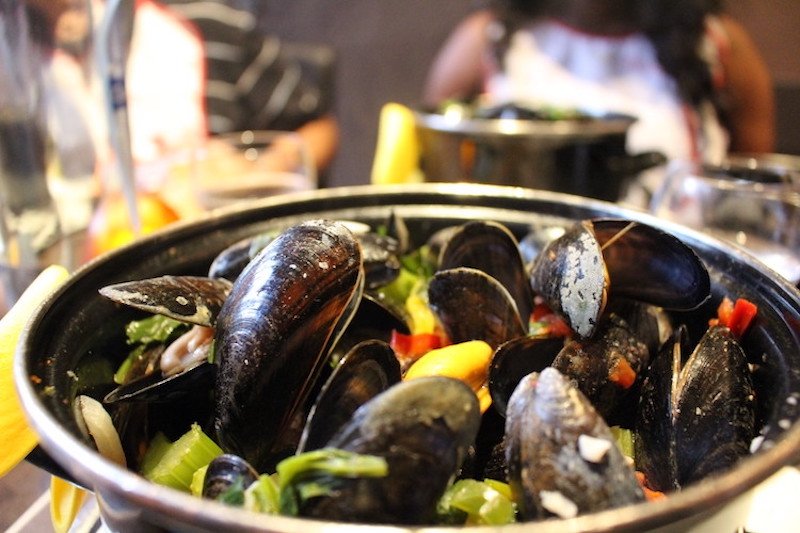 There’s plenty of  fantastic chocolate in the world, and then there’s Belgian chocolate. Founded in 1995 in Brussels, the world-renowned Pierre Marcolini produces decadent truffles, candies, macarons, ice cream, chocolate-infused drinks, and even condiments made with fine ingredients from around the globe. These little pieces of heaven are completely worth the splurge.

Since there aren’t any Pierre Marcolini boutiques in the US, it looks like I need to travel abroad again,  to savor fine chocolate from this renowned chocolatier. 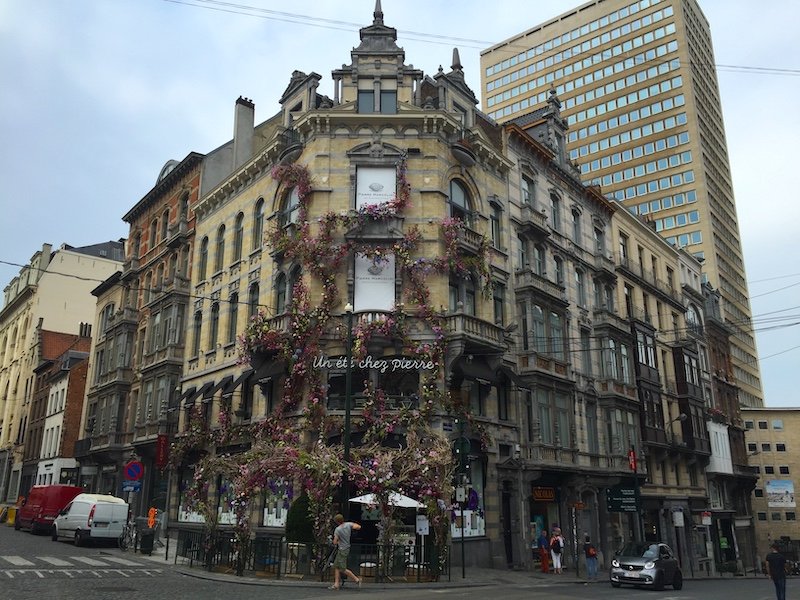 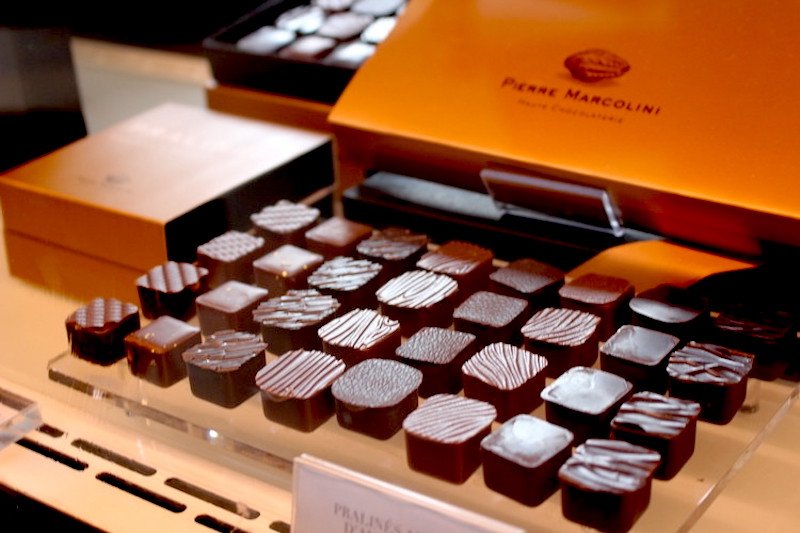 Everyone should stop at Pierre Marcolini in Brussels.

As a wine drinker, I rarely have a beer. But when in Belgium….
After sampling three local beers one afternoon, I can honestly say that I could easily start drinking beer more often. If only my waistline approved. My friend and travel mate Danielle Gray doesn’t drink beer at all, and even she enjoyed it. Yes, you don’t need to be a beer lover to love the brews here –– the Belgian beer is that good. To sample the country’s brews, find a flurry of taverns and restaurants in the Îlot Sacré neighborhood, very close to La Grand Place. 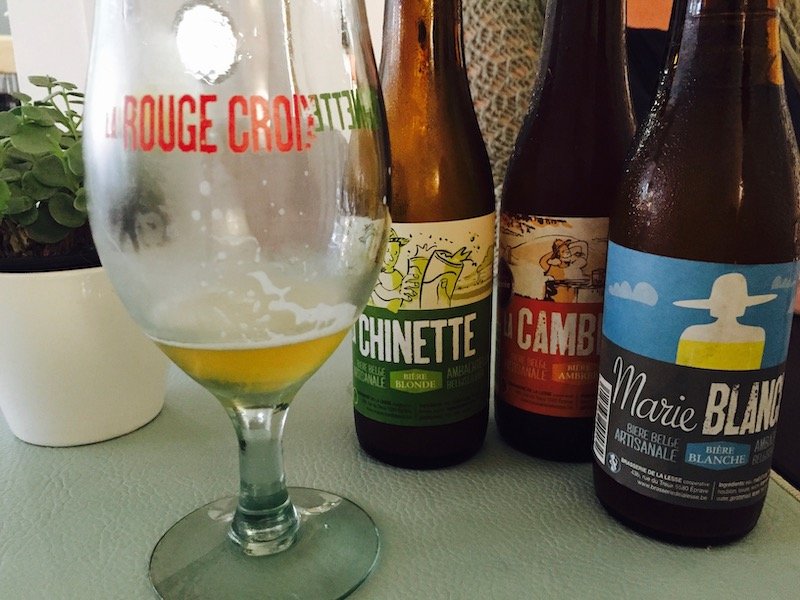 You can’t go to Belgium and not eat a waffle, or so I told myself. I tasted the waffles in Brussels and Liége, and both were delicious, but if could eat only one, I’d choose the Brussels waffle. It’s ultra light with deep holes, and a dusting of powdered sugar adds a touch of sweetness. So, I’ll say it again –– you don’t go to Belgium and not eat a waffle. And if you spend any time in Brussels, get one that is freshly made before your eyes. I recommend Maison Dandoy. 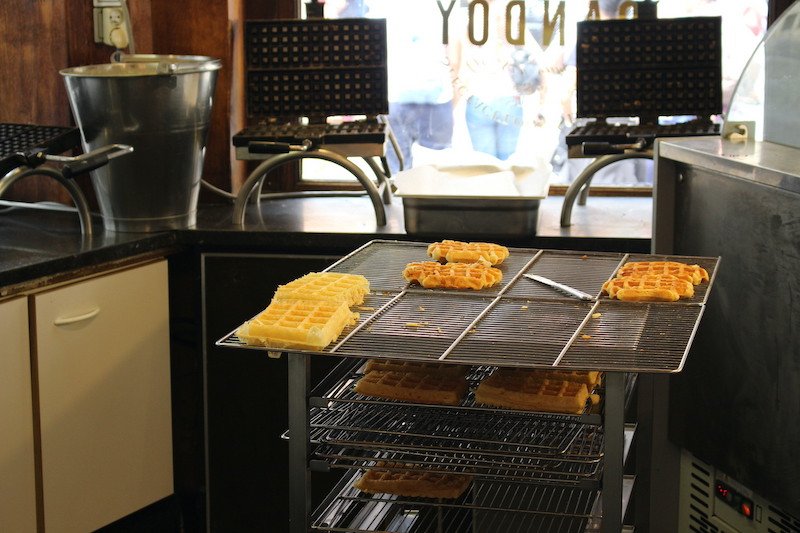 Waffles at Maison Dandoy in Brussels

A few words on traveling to Brussels…

As many of you read this post –– even as you look at all the pretty pictures and learn about the fun I experienced during my time in this city –– you might be apprehensive about visiting Brussels. You’re not alone. If I’m honest, I too, was nervous about traveling to Brussels. I’m glad that I didn’t listen to my doubts, but rather, pushed through my insecurities, because I loved my time there, and would definitely return.

We can’t stop living our lives or seeing other parts of the world because of threats or what might happen. That’s not to say that we shouldn’t be smart, cautious, and alert at all times. This is our new normal, and the world we live in, whether we’re talking about Brussels or elsewhere. 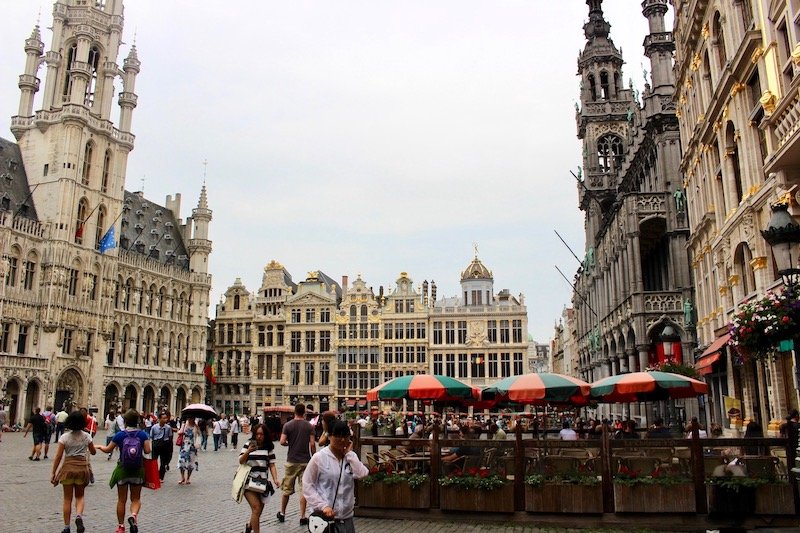 We can’t change past events or automatically remove a stigma that’s been associated with any place. It’s no surprise that negative thoughts often hang over our heads as we enter a crowded area, board a plane or train, or venture miles from home. Our new reality is that no place is safe. We aren’t completely immune to crime or terrorism in small town USA, and we aren’t immune when we travel.

Meanwhile, I believe that travel remains the greatest unifier –– bringing people of different cultures and beliefs together and proving that at our very core, we are all more alike than we’d imagined. I’m so happy that I had the opportunity to visit Brussels.

Two days in Brussels provides a taste of this beautiful city, and will likely leave you wanting to return to experience more. 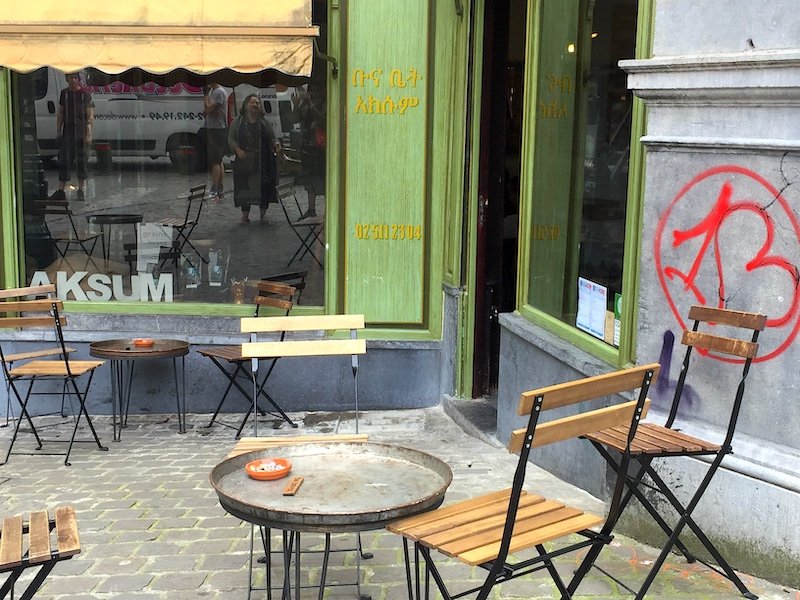 Until we meet again…

Many thanks to Paquita for a fabulous tour of Brussels, and to Tourisme Wallonie, who sponsored a portion of my trip. For more information about what to do if you have two days in Brussels, visit the tourism website.