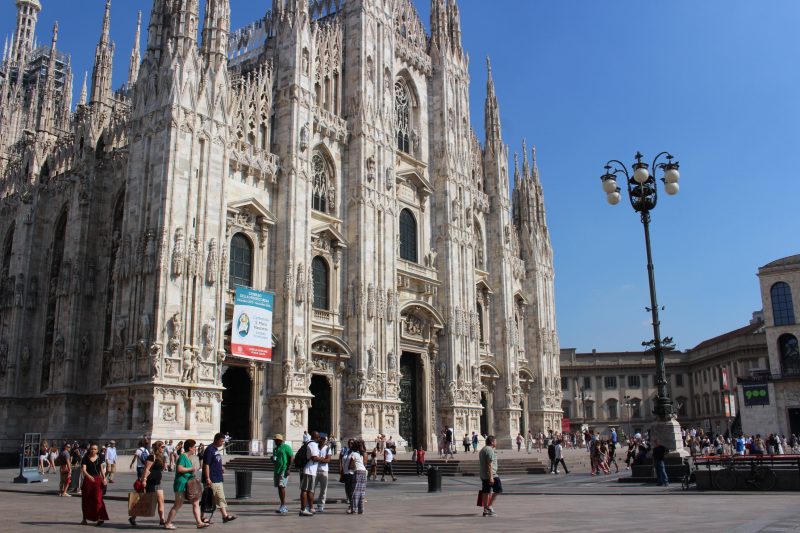 Spend two days in Milan, and you’ll easily understand why this Italian city remains a favorite among the fashion-forward and business-savvy. Sure, Milan might be recognized as one of the world’s style hubs, but above and beyond the couture and catwalks, this Northern Italian metropolis offers a wealth of cultural attractions. Like other major cities, you’ll barely skim the surface on a short stay, but if you plan carefully, you can cover a lot of ground in a couple of days.

Have only 48 hours to explore Milan? Read on for suggestions on how to spend two days in Milan.

A bustling square in Milan’s city center, this piazza can’t and shouldn’t be missed. Piazza del Duomo is a fantastic spot to people watch, snap photos, and bask in Italian culture. Although it’s one of the most visited tourist attractions, Milan locals also frequent the legendary landmark.

Even if you rarely if ever tour cathedrals when traveling, set aside an hour or so for the Duomo. This iconic architectural treasure and place of worship is the third largest Gothic cathedral in the world, and completely breathtaking inside. I spent a relaxing afternoon walking around the plaza, taking pictures, touring the church and museum, and eating gelato. (More on ice cream later.) 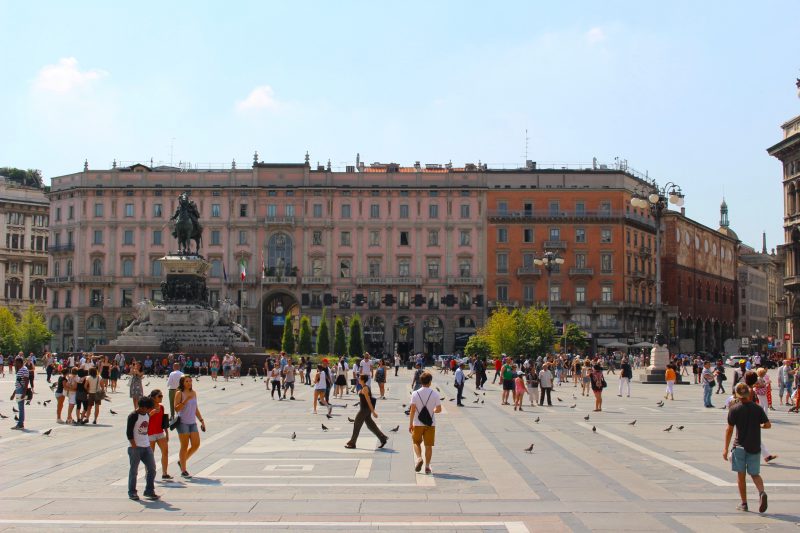 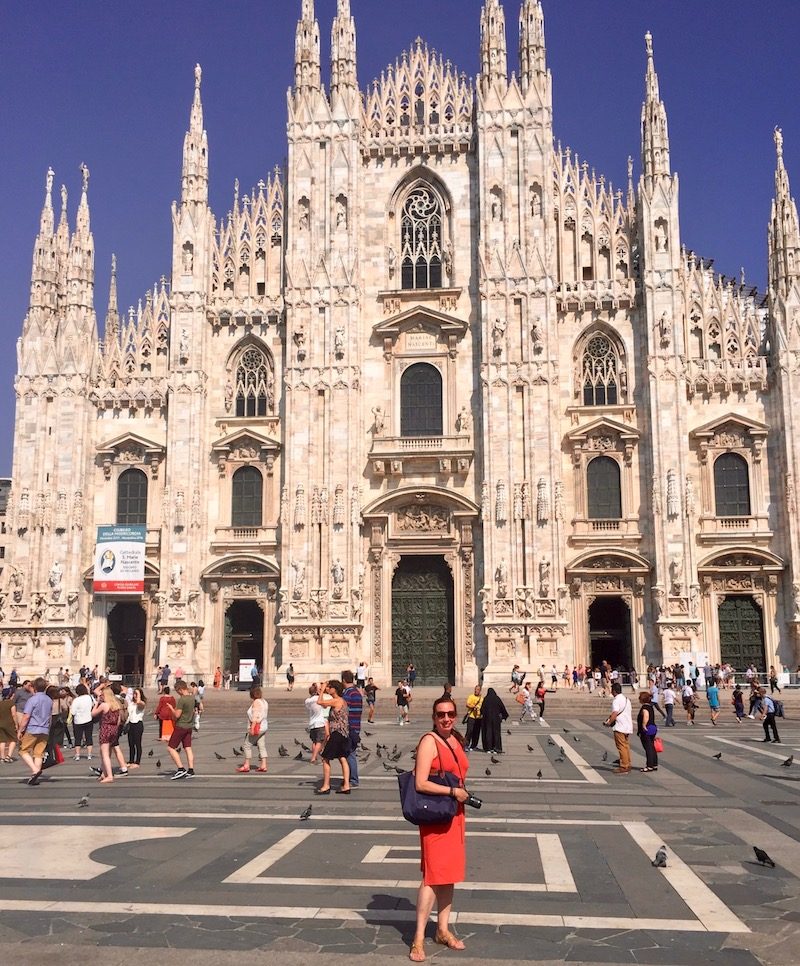 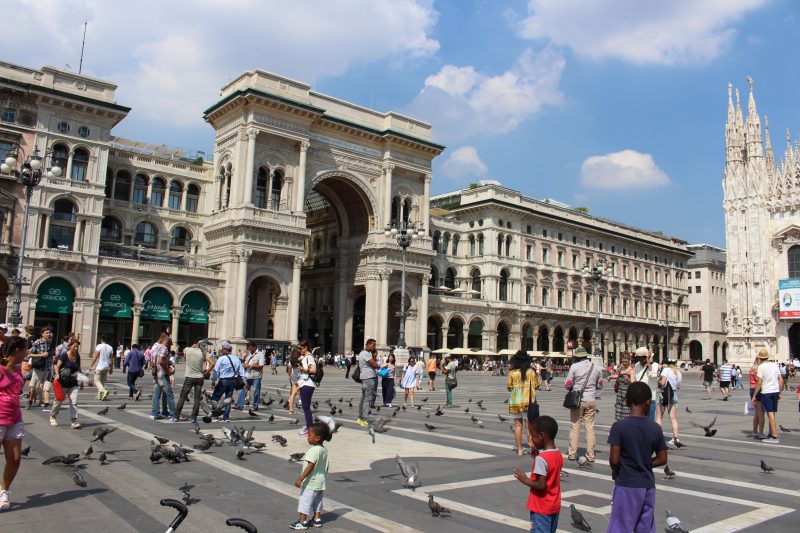 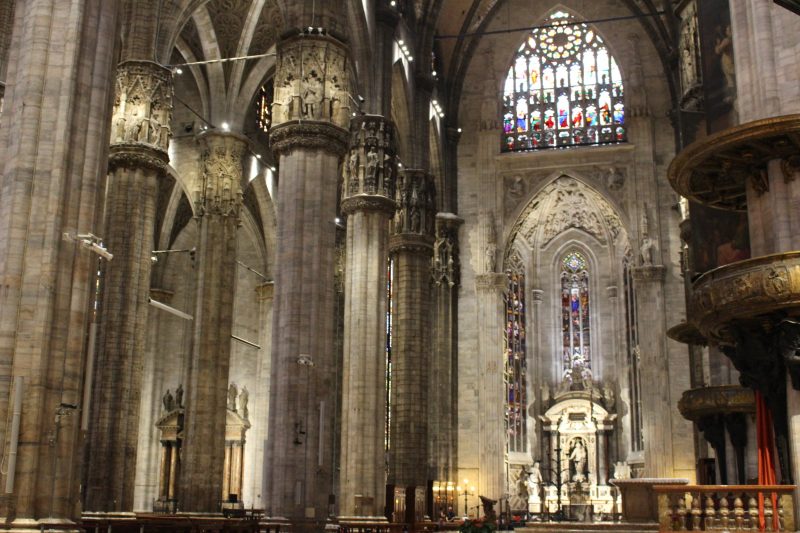 Adjacent to the Duomo is the world’s oldest shopping mall. Shop everything from designer clothing, shoes, and jewelry, to books and art. You’ll also discover some of the cities most established restaurants, bars, and cafes, ideal if your appetite kicks in while shopping. And if you’re not in the mood to shop or you’re saving your money for delicious Italian eats and drinks, the Galleria is worth a visit its magnificent design. 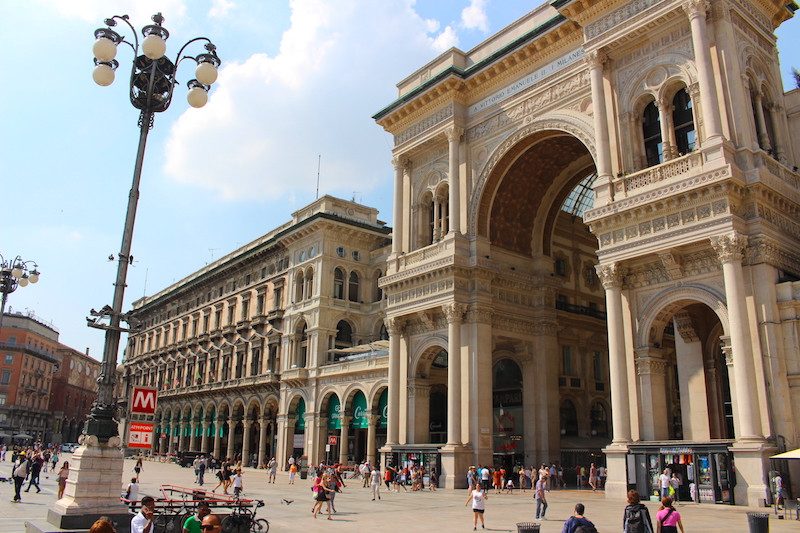 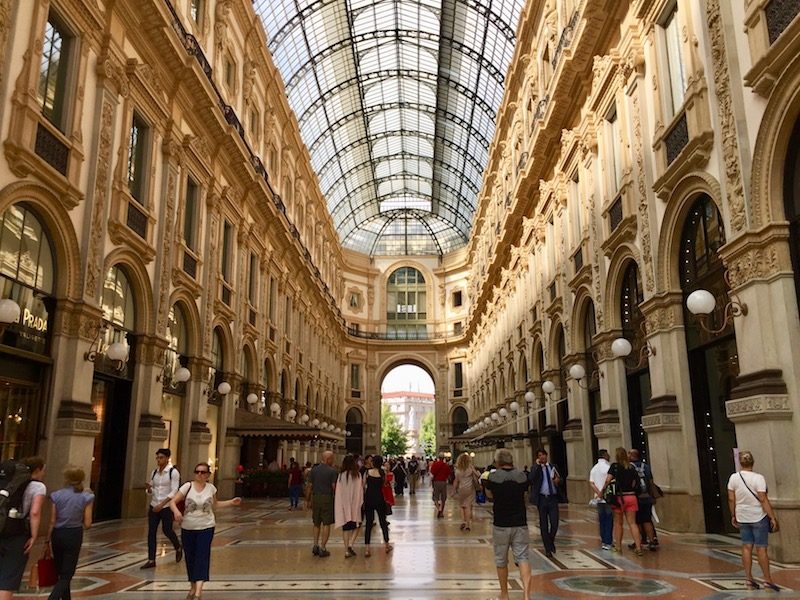 Relax with a Campari cocktail at Camparino in Galleria.

Campari is undoubtedly Italian, and there’s no better place to savor a Campari cocktail than Italy. While you’re in the Galleria, step into the elaborate Camparino, first opened in 1867, and order an Aperol Spritz or a Campari with orange. Whichever libation you choose, remember that famed Italians like Toscanini hung out here too, so relish every moment.

Of all the things to do in Milan and incredible Milanese food to taste, you must eat gelato. I’ve had some tasty gelato in New York, but none quite as good as what I’ve eaten in Italy. I suspect the atmosphere might have something to do with it, but I tend to believe that the ingredients are unbelievably fresh and from local sources, making all the difference in the creaminess and flavor.

Gelato Guisto (translates to “gelato done right”) makes only a smattering of flavors at one time, but they’re all decadent.

Spend an evening at Navigli.

Milan’s canal district offers artist studios, boutiques, taverns, some of the city’s best food, and one of most idyllic places to watch sunsets. Opt for a jog, bike ride, or romantic stroll, and in the summertime, you might be lucky to hear a live concert along the canal.

Early in the day, Navigli is quiet, but in the evening, the neighborhood transforms into a hotspot, bustling with tons of locals and tourists. Exploring this district is one of the most quintessential things to do in Milan. 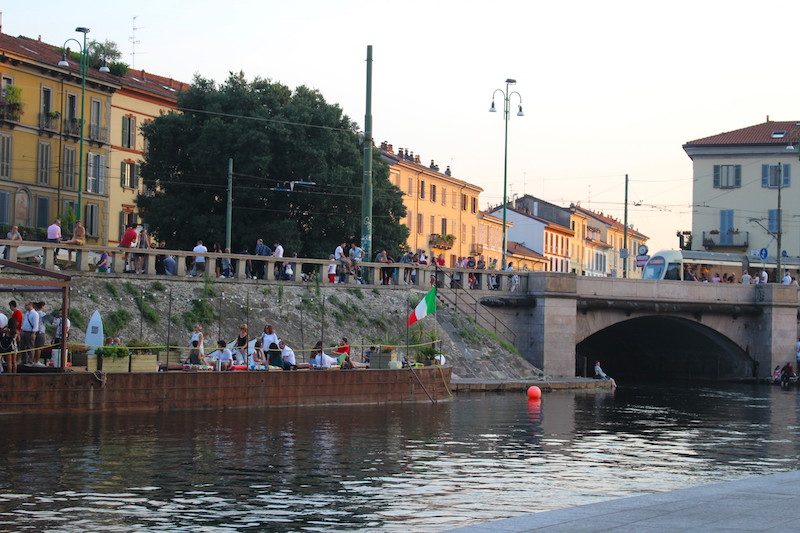 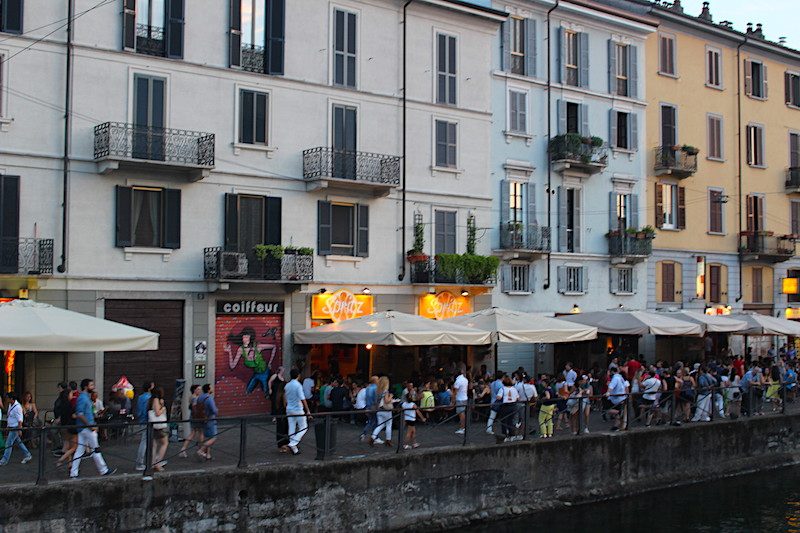 Mix with the locals at Parco Sempione.

I stumbled upon this park by accident, and I was happy I did. Set in the city center, the vast urban green space provides an escape from the city, so much so, that you’ll barely believe you’re in Milan at all.

Parco Sempione is a peaceful spot, so I’d allow at least an hour to chill out and take in the surroundings. Be sure to see the Castello Sforzesco, a castle dating back to the 15th century that’s been converted into a museum complex. 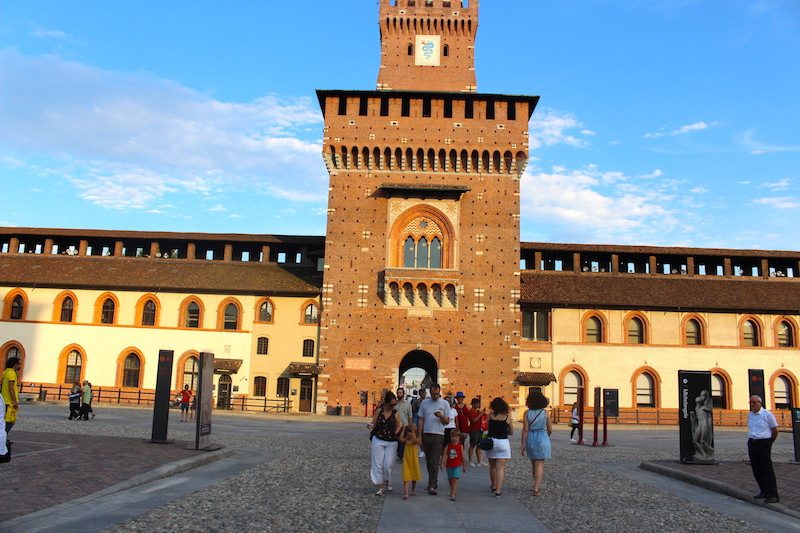 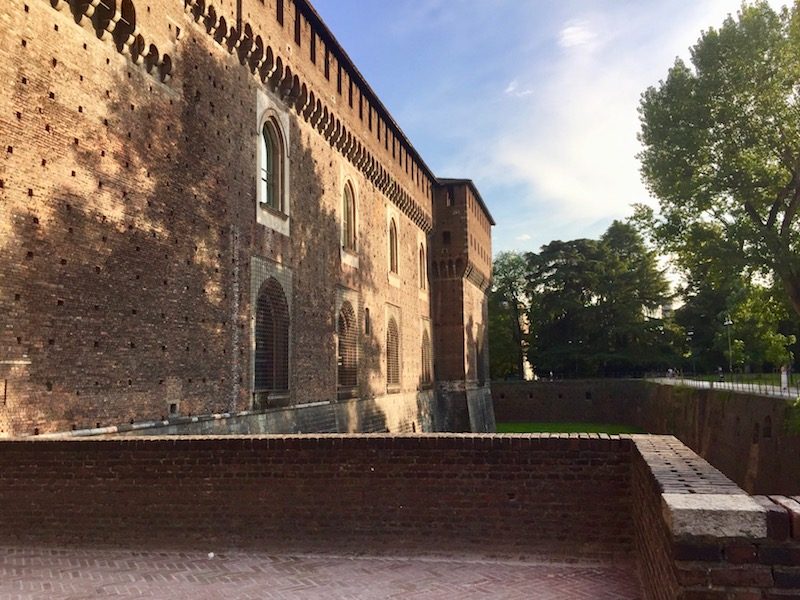 This main thoroughfare is Europe’s longest shopping street, so you’ll have an array of stores to browse.  Corso Buenos Aires isn’t all high fashion like much of Milan, but rather, the avenue provides a bevy of bargains for shopaholics looking for a deal.

Some stores are chain retailers (Zara, H&M, Calvin Klein, Esprit), while others are independent boutiques. Bring your credit cards, and give yourself enough time, because there will be sales. 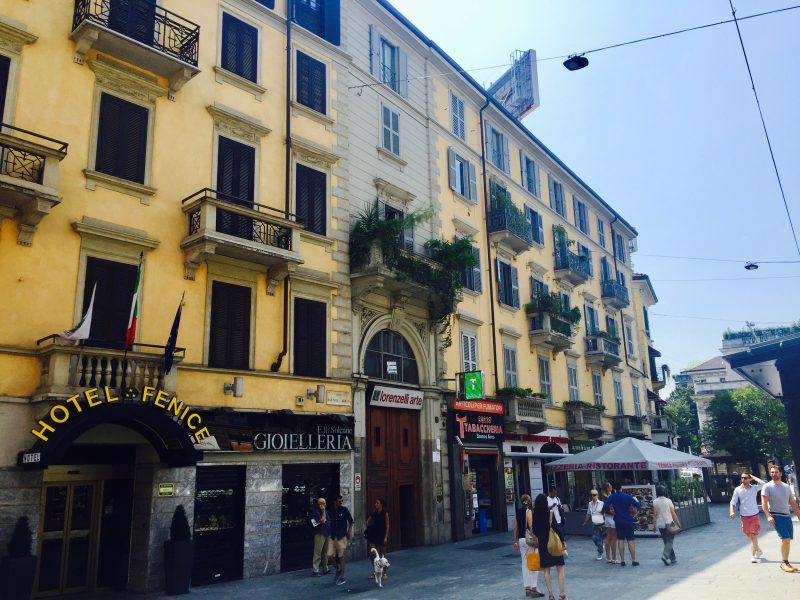 Of all the things to do in Milan, spending a few hours in Brera was probably my favorite experience there. Located in the northwestern part of town not far from the Duomo, this neighborhood is picturesque, charming, and provides plenty of cafes, taverns, and small shops. Wander around like you have no place to be ( do you?), and get lost in the romance of Brera.

I stopped at Taverna Borgo Antico and sipped an excellent Italian chardonnay and a tasty Caprese salad for lunch. Delizioso! 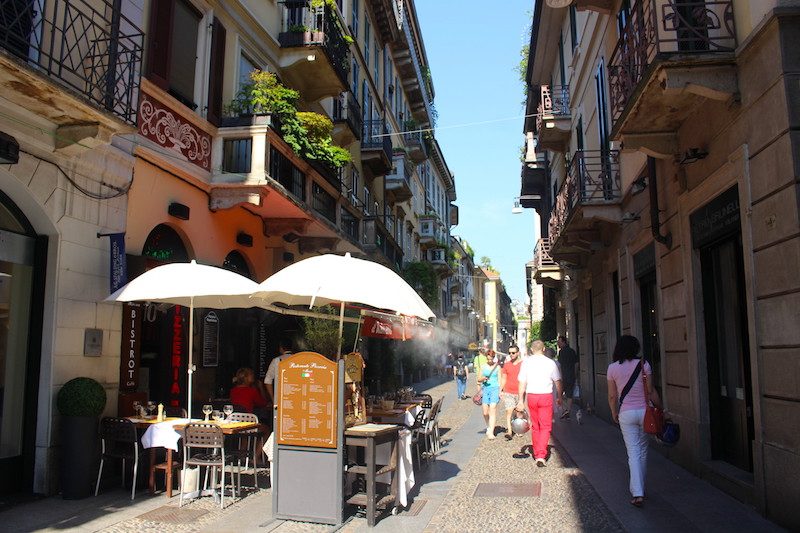 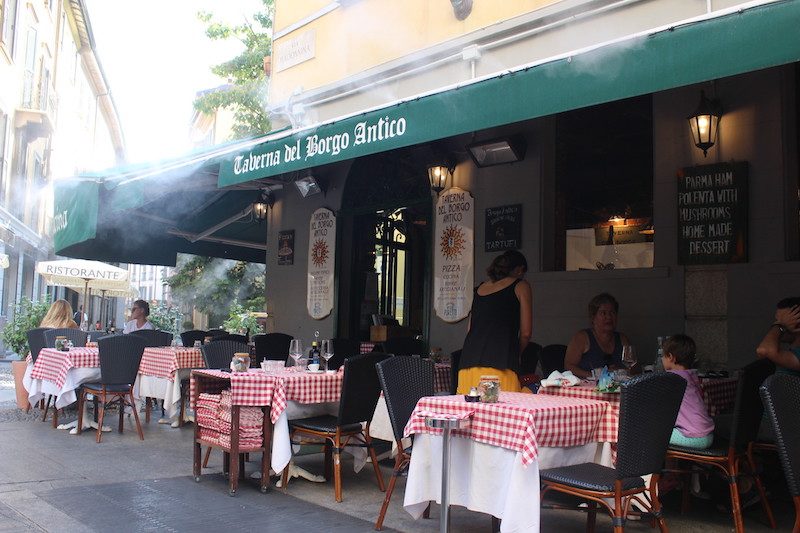 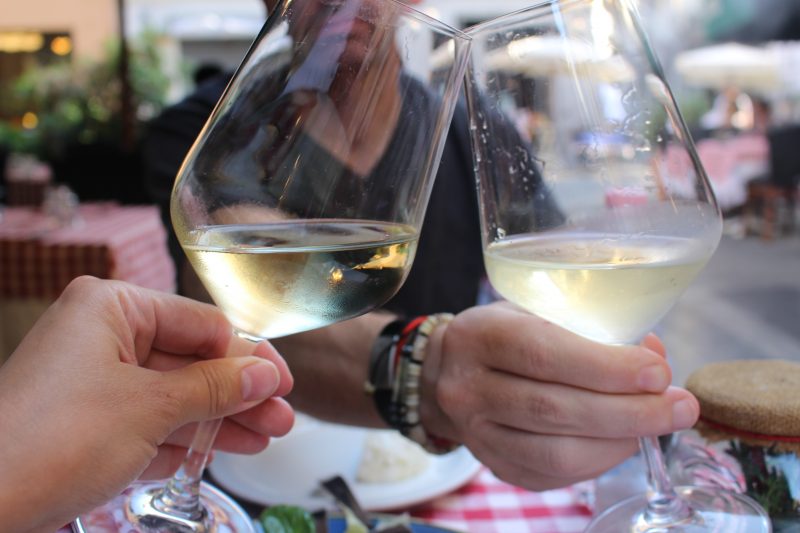 I had just two days in Milan, but I saw a lot of the city, and explored everywhere on foot. For me, that’s the best way to see any city.

Also, what you should do when you visit Liége, Belgium. And no matter what, don’t stop traveling.