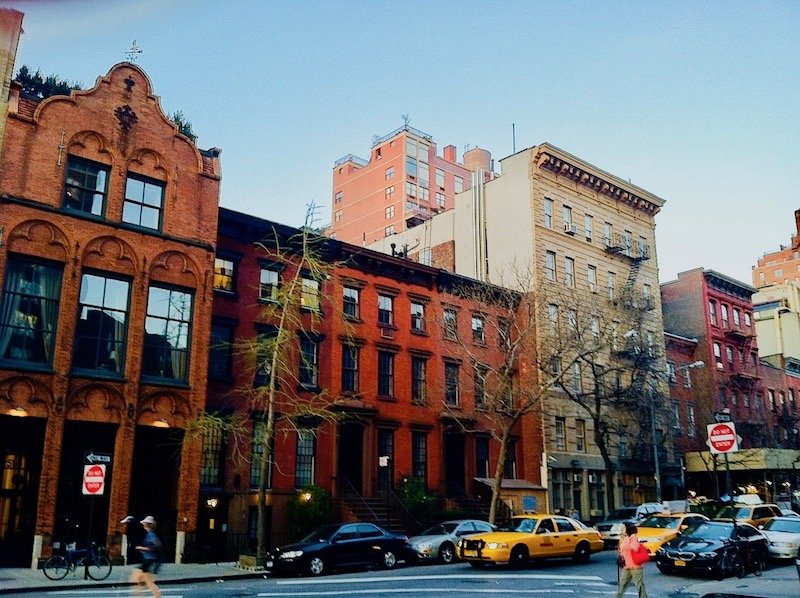 It’s no wonder that so many people flock to the West Village. This area of NYC boasts charming streets with cool names like Horatio, Jane, Christopher, and Perry, and it’s one of the most fascinating New York neighborhoods to explore. The borders stretch from 14th Street on the north end to Houston Street on the south, Sixth Avenue (or Seventh, depending on whom you ask) to the east and the Hudson River to the west.

This chunk of the greater area known as Greenwich Village continues to garner record prices for both apartment rentals and purchases and draw locals and tourists for its trendy shops, and myriad food and drink options.  It remains one of the most picturesque slices of Manhattan, and a historic neighborhood gushing with stories from days gone by. If you’re interested in exploring, here’s a West Village guide to get you off on the right foot.

You can’t ignore the architecture of the West Village, and I recommend spending some time taking in the gorgeous blocks of 19th-century townhouses. Streets like Jane make me take a deep breath with an “I Heart NY” sigh. I’d love to stay in one of these beauties for a night (or year). And then there’s Bedford, Grove, Bank, and Charles––be sure to check out those charming streets as well. 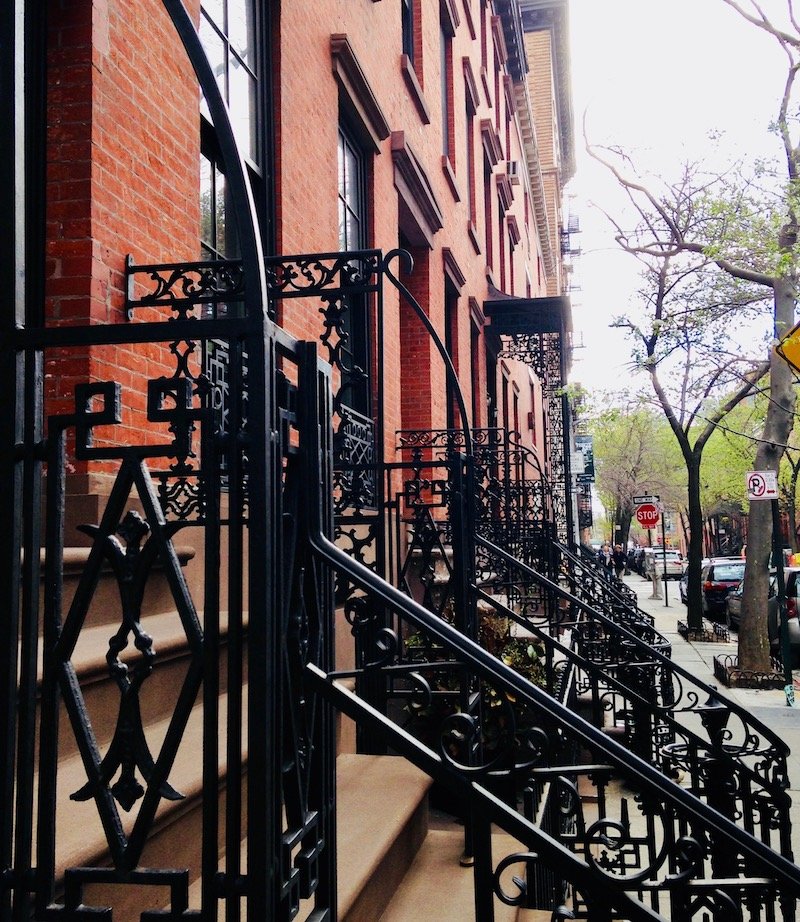 Bus Stop Café is a go-to brunch spot with sidewalk seating at Hudson and West 12th, and nearby you’ll find La Bonbonniere, The Elk, Jack’s Wife Freda, the Little Owl, L’Artusi and many more spots for coffee, dessert, or a fantastic meal. Go to the neighborhood hungry, and you will not be disappointed in any of these spots.

All I can say is bring your credit card when you explore the shops of the West Village. While many of the neighborhood’s stores line Bleecker (up next), you’ll find shops sprinkled throughout the neighborhood. My faves include C.O. Bigelow, Village Cigars, and Myers of Keswick.

With its many boutiques, bars, clubs, and restaurants, this famed street is one of the most traveled in all of New York City. Although Bleecker has evolved over the years, everyone who visits the West Village should still take a stroll down this quintessential NYC street. Stop into Goorin Bros. for hats and Murray’s Cheese for, you guessed it, all things cheesy. 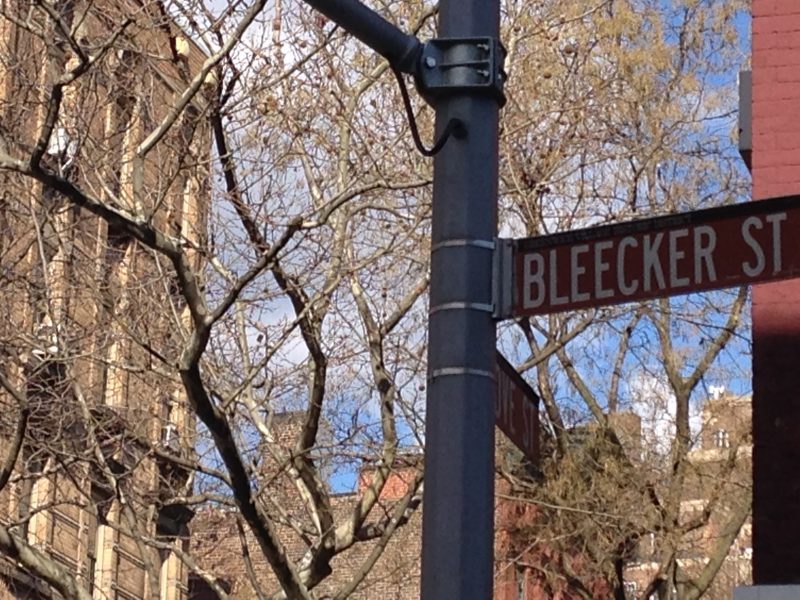 Did you know that Abingdon Square is one of New York’s oldest parks? This pocket park is bordered by Bank Street, Hudson Street, Eighth Avenue, and West 12th Street. It’s a little respite frequented by West Villagers.

The city’s oldest continuously running Off-Broadway theater, Cherry Lane has showcased the talents of Barbra Streisand, Gene Hackman, Cicely Tyson, Harvey Keitel, Tyne Daly and countless other actors. It’s long been a refuge for the creative set, welcoming the theatre community to hone their craft in front of receptive and passionate audiences.

You can’t miss this gorgeous piece of architecture on the eastern edge. Situated on Sixth Avenue between 10th Street and Christopher, the 19th-century building was once a courthouse, but now it’s a branch of the New York Public Library. In warm weather, immerse yourself in nature and visit the lovely Jefferson Market Garden.

Yes, that famed apartment from the ’90s sitcom with a cult following is located at the corner of Grove and Bedford Streets in the West Village. Know that the show wasn’t actually filmed here, but on a set in Los Angeles. You’ll see shots of the exterior apartment building throughout the series. And in case you’re wondering, Monica’s sprawling apartment would rent for more than $5,000 if it were to hit the market today.

Hit up divey spots like Art Bar, Johnny’s, Corner Bistro,  the Village Vanguard for live jazz, and Employees Only and The Otheroom for cocktails. Tavern on Jane has terrific wines by the glass and delicious food, yet has that local corner pub kind of feel. And then there’s the circa 1880 White Horse Tavern where history oozes through the cracks in the walls. I suggest a bar crawl. 🙂

No West Village guide is complete without a mention of this legendary tavern. The site of the 1969 riots, the inn is the birthplace of the gay rights movement and paved the way for future members of the LGBT community. Also an amusing bar – every day is a party at the Stonewall.

This quaint park lies just across the street from the Stonewall Inn at the intersection of Seventh Avenue South and Christopher Street. The white bronze sculptures – by George Seal – are titled “Gay Liberation’ and were cast in 1980. Relax with lunch or a great book one of the benches – the perfect way to end your time in the West Village. 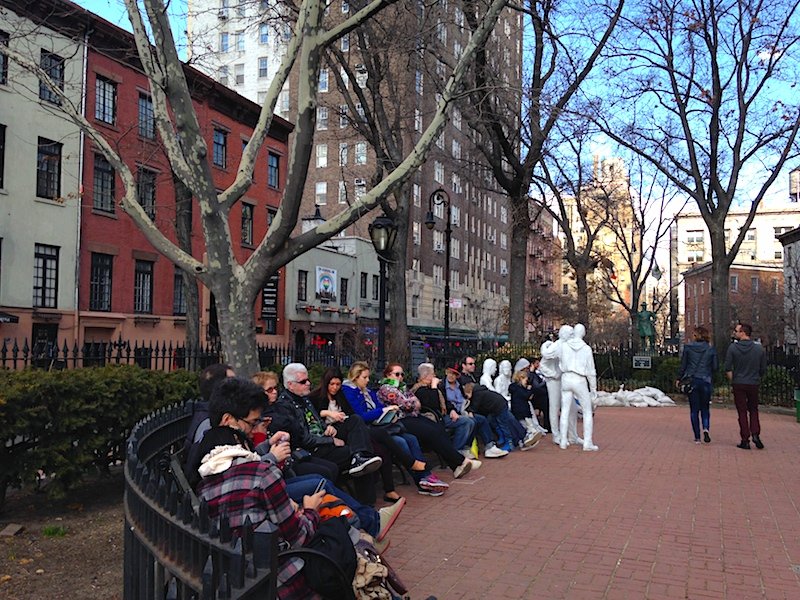 How to get to the West Village

You have plenty of transit options. Take the A/C/E or L to 14th Street and Eighth Avenue and walk south. Or take the 1/2/3 to 14th and Seventh. The 1 train also stops at Christopher Street, which is in the heart of the neighborhood. On the eastern edge, the E/M, F, and L stop at 14th and Sixth. And the West 4th Street Station stands at Sixth between West Third and Fourth Streets. It’s just west of Washington Square Park. If you decide to take a taxi, use the Christopher Street station as a landmark since it’s centrally located.

I hope you can use the West Village guide the next time you visit. Do you have any suggestions to add?

Also, check out the High Line, and Little Island. Both parks are just steps from the West Village.

« The King Cole Bar: What to Know Before You Go
2 Days in Nashville? Here’s What to Do »